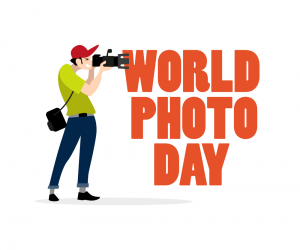 World Photo Day is an annual celebration that is commemorated on August 19. Many things cannot be brought back into this world again which has transferred from the present to past scenarios. It includes the precious moments missed, words left unsaid, or it even includes the lost lives too. But those memories in any person will remain the same with life when it is perfectly captured. World Photo Day is a worldwide event that aspires in creating positive change in the world through the means of photography. World Photo Day is celebrated in the form to inspire millions of photographers from across this mother earth to share a photo with the purpose to share their world with the world of others. Bring out a change, bring out the emotion in real with a flash of the light from your camera and a moment in time captured to keep it forever. Celebrate World Photo Day with the click of the camera to bring out some positive impact in your community.

“Photography is a powerful method of communication that we can use to uplift, inspire and initiate change in our world. A picture is worth a thousand words and those words can be in any of the 6,500 languages on planet earth” – Korske Ara

World Photo Day is created by Korske Ara who is an Australian photographer in the year 2009. It was started as an idea with the bedroom of a young photographer, and World Photo Day now has grown into the biggest photography celebration in the world. The commemoration of this photography day began to encourage people by capturing the moments to share it with the world and get inspired by fellow photographers. The aim and motto of World Photo Day are to connect millions of photographers from around the world to celebrate the day and invests back to their societies in the form of photos. The photography day endeavors to open one’s eyes to look at the possibilities of photography and thus to enable those persons to show other the world as they see it, irrespective of who, where, and what equipment and skills one has within. More notably, the team of World Photography Day has been working alongside organizations by providing funds to bring out positive changes. However, the date behind the day had been originated from the invention of Daguerreotype photography.

The date was chosen to honor the development of this photographic process by Joseph Nicèphore Nièpce and Louis Daguerre in the year 1837 on the same date. It was also the same date in 1839 on which the French government had purchased the patent and announced the invention as a gift quoting “Free to the World.” Earlier to Daguerreotype, Nièpce had captured the permanent photograph in 1826 using the process called Heliography. It was called ‘View from the Window at Le Gras.’ The daguerreotype is permanent photography that used silver chloride coating on a piece of paper. But those photos would later turn into black due to the effects of silver chloride. Over the years, before and after the invention of Daguerreotype photography, photographs have crossed lots of development. Not only the photography got better, but with the digital invention, the instruments and devices like the camera have been made lighter, simpler, and are easy to use. World Photo Day had hosted its first global online gallery on August 19, 2010. About 270 photographers had shared their pictures and the website had been visited by people from over 100 countries. It marked the first official, globally reaching World Photo Day.

The best way to celebrate World Photo Day is to move out with your camera no matter which one you own and capture every beautiful moment you see around. The camera is the only medium that could save your memories for later. So shot every little thing irrespective of whatever category it falls into like nature, wildlife, vacation spot, special occasions, anything, and everything. Try out different things in photography and to your photographs by creating collages, adding effects, or edit it in the way you like. As to represent the motto of World Photo Day, shot pictures in such a way that would bring in some form of positive effects or transformation in the society. Share out all your photos as a form of photographic day celebration on social media using the hashtag #WorldPhotoDay.

Thank you for reading the post. You can celebrate every day with Happydays365.org and Happy World Photo Day 2021.