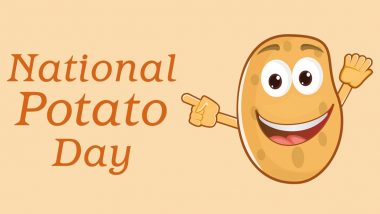 National Potato Day is celebrated on August 19 of every year. For centuries, potatoes are the favorite item of diets everywhere in the world. Potato lovers are found in massive numbers, and that primarily includes the children. With a soft, smooth nature, potatoes can be eaten in different forms like potato chips, mashed potatoes, gratin, hash-browns, baked potatoes, potato salad, Hasselback, home fries, tater skins, potato cake, potato wedges, kroppkaka, and the list extends in number. They are just some of the amazingly tasty items which are made with potatoes. Celebrating National Potato Day is worth noting to let people know the nourishment it has. Potatoes are not only savory, but they also contain high levels of vital vitamins and minerals that include vitamin C, iron, and potassium. Prepare your favorite potato recipe in a way to celebrate National Potato Day.

“My idea of heaven is a great big baked potato and someone to share it with.” – Oprah Winfrey

The origin and the person who established the National Potato Day are still anonymous. However, the history of potatoes dates back centuries ago. The English word potato has all the way came from the Spanish word patata. The word “potato” may indicate either the plant itself or the edible tuber. Usually, the potato is a starchy, tuberous vegetable from the perennial nightshade Solanum tuberosum. The first region where the potato was first domesticated in modern-day southern Peru and extreme northwestern Bolivia between 8000 and 5000 BC. From then on, potatoes have spread throughout the world and are now a staple crop in several countries. Now it is an integral part of the world’s food supply, and that is marked as the one of world’s largest food crops which ranks fourth position the following maize, wheat, and rice. The smaller potatoes are named spuds and are associated with the 19th century. There are millions of different styles of preparation is found in American cuisine where potatoes are a favorite part and occupy larger parts. Potatoes are used in making bread, rolls, and pancakes, and are also found as a whole in everyday meals. The production of potatoes worldwide was more than 382 million tonnes at present. Potatoes vary in color, texture, size, and shape with reapest to the region they grow. There are currently more than a hundred different varieties of potatoes available in the world. National Potato Day is one form of celebration to make people understand the nutritional values present in the potatoes. Raw potato consists of water, carbohydrates, starch, sugar, dietary fiber, fat, protein, and vitamins like B1 to B6, B9, C, E, K. The mineral contents like calcium, iron, magnesium, manganese, phosphorus, potassium, and sodium are also available. It is one must-have food for anyone with which almost all the dietary supplements are obtained. One most notable incident about the potato with Ireland is the potato plague. It made the people of the entire country starve as they were reliant on the potato as their food crop. Celebrating National Potato Day highlights the note as one must have good health to live longer.

How to Celebrate National Potato Day

There are lots of interesting ways available by which you can celebrate National Potato Day. You can add potatoes in small quantities to the daily meal you prepare. To make it spicy, prepare tasty potato fries, chips, mash potatoes with species, or cook hash browns with salt and pepper. To be more creative, you can try out a new dish yourself with potatoes and serve them hot to your friends and family. Buy Good Russian Vodka which is a distillation of potato to celebrate Potato Day in a unique way you want. Share and post your National Potato Day celebration using the hashtag #NationalPotatoDay on social media.

Thank you for reading the post. You can celebrate every day with Happydays365.org and Happy National Potato Day 2021.