Robbie Burns is the National Poet of Scotland and is known as a popular Scottish poet and lyricist. His work in the Scots language is most popular in Scotland and Worldwide. Some of his famous works are “Auld Lang Syne”, “To a Mouse”, “A Man’s a Man for A’ That”, “Ae Fond Kiss”, “Scots Wha Hae”, “Tam O’Shanter”, “Halloween”, and “The Battle of Sherramuir”. Robbie Burns Day is a day to celebrate his life and the work of the poet Robbie Burns. This day is also called Burns Supper or Burns Night or Robert Burns Day or Rabbie Burns Day. So let’s see about the history of the day and how to celebrate this day in the article below.

During Robbie Burn’s fifth anniversary of their death, Burn’s friends joined together for supper and recite some of the popular poems to commemorate the day. Later that year, the first Burns Club was founded in Greenock in 1801 and the first Burn’s supper was held on that day 29 January 1802 which was taught as Burns’s birthday. But later when they discovered his real birthday which is on 25 January, the supper was shifted to that date. Starting from that day to the current, Burn’s supper was celebrated as one of the biggest nights of the year in Scotland.

The Day is celebrated in a grand manner in Scotland every year on January 25. The event happens in the following order: Piping in guests, Host’s welcoming speech, Soup course, Haggis, Piping in the haggis, Address to a Haggis, Main course, Other courses, Toasts, Immortal Memory, Address to the Lassies, Reply to the Laddies, Works by Burns, and finally the end of the event. In the event, Bagpipes and Scottish music are used to invite the guest and invite them to the party. You can also celebrate the day by posting the poem, or song of Robbie burns on social media platforms like Instagram, Twitter, Facebook, etc with the hashtags #RobbieBurnsDay, #BurnsSupper, and #BurnsNight.

Popular Dishes made on Burns supper

Burn Supper is served with a traditional Scottish meal consisting of Haggis, Neeps, and Tatties, along with Scotch Whiskey.

How to make the Recipe for Haggis 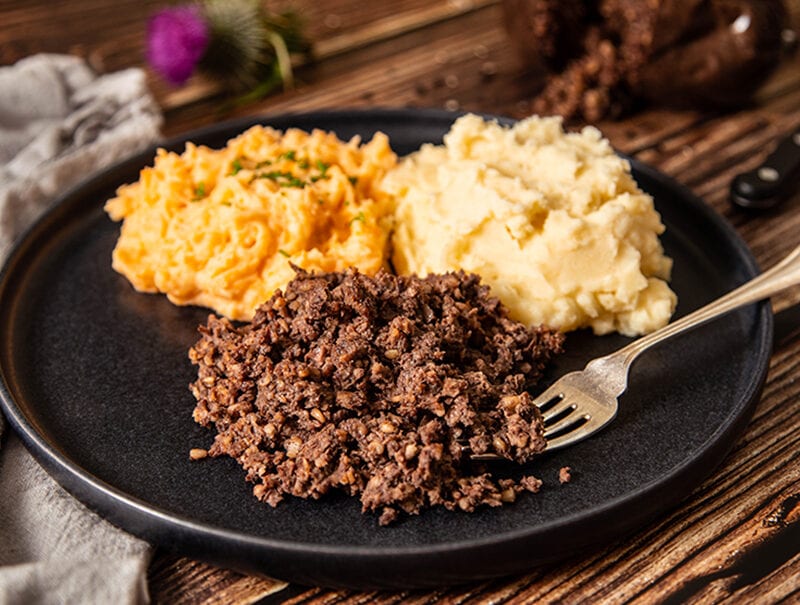 Other Celebrations on January 25

January 25 is also celebrated as

Then, horn for horn, they stretch an’ strive:
Deil tak the hindmaist! on they drive,
Till a’ their weel-swall’d kytes belyve,
Are bent like drums;
Then auld Guidman, maist like to rive,
“Bethankit” hums.

Ye Pow’rs wha mak mankind your care,
And dish them out their bill o’ fare,
Auld Scotland wants nae skinkin ware
That jaups in luggies;
But, if ye wish her gratefu’ prayer,
Gie her a haggis!

Fair fa’ your honest, sonsie face,
Great chieftain o’ the puddin-race!
Aboon them a’ ye tak your place,
Painch, tripe, or thairm:
Weel are ye wordy o’ a grace
As lang’s my airm.

Poor devil! see him ower his trash,
As feckless as a wither’d rash,
His spindle shank, a guid whip-lash,
His nieve a nit;
Thro’ bloody flood or field to dash,
O how unfit!

His knife see rustic Labour dicht,
An’ cut you up wi’ ready slicht,
Trenching your gushing entrails bricht,
Like ony ditch;
And then, O what a glorious sicht,
Warm-reekin, rich!

The groaning trencher there ye fill,
Your hurdies like a distant hill,
Your pin wad help to mend a mill
In time o’ need,
While thro’ your pores the dews distil
Like amber bead.

Thank you for reading the article. Hope you enjoying the day Burns Supper with some great Haggis and the “Auld Lang Syne” song in the background. Enjoy every day of your life with Happyday365.org and Happy Robbie Burns Day.