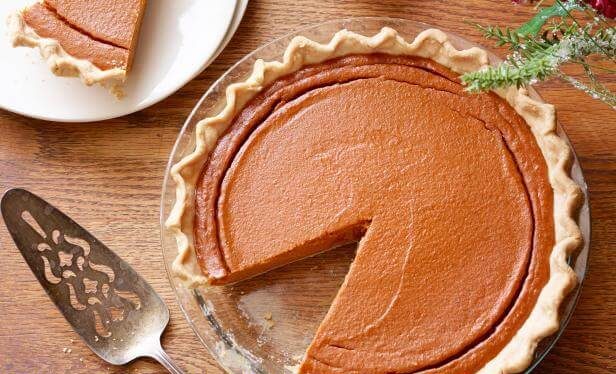 “I love the scents of winter! For me, it’s all about the feeling you get when you smell pumpkin spice, cinnamon, nutmeg, gingerbread and spruce.” – Taylor Swift

The history, origin, and the founder of the National Pumpkin Pie Day are unknown. Pumpkin Pie is a spiced, pumpkin-based custard filling served during the fall and early winter. It is a traditional North American sweet dessert pie usually served at Thanksgiving and during Christmas. Pumpkins are the symbol of harvest time and are also served during Halloween. This type of pie consists of a pumpkin-based custard, where it’s color ranges from orange to brown. It is baked in a single pie shell and is rarely done with a top crust. Cinnamon, powdered ginger, nutmeg, and cloves are the flavoring agents used in Pumpkin pie-making.

At times, Allspice is used commonly that will replace the clove and nutmeg. Cardamom and vanilla are also used as the batter spices. The pumpkin pie spice is made of the spice mixture. The pumpkin pie was initially prepared by stuffing the pumpkin with apples, spices and sugar then baked it as a whole. The canned pumpkin or packaged pumpkin pie filling is used in pie-making. Cucurbita moschata is the mainly used pumpkin varieties used in pie-making. In the seventeenth-century English cookbooks like Hannah Woolley, The Gentlewoman’s Companion has mentioned the Pumpkin pie recipes. After a century, the pumpkin pie recipes began to appear in the American cookbooks.

Other Celebrations on December 25

December 25 is also celebrated as

Celebrating the National Pumpkin Pie Day is very simple. Fill your mouth with the Pumpkin Pie to celebrate this Day. Get to know more about the pumpkin pie and how to make it. Prepare it for your family and serve them to enjoy the fun food feast Day. To make it simpler, you can even buy a pumpkin pie for your family and friends from your favourite pastry shop. Eat it with the whipped cream Share your Pumpkin pie celebrations on the social media using the hashtag #PumpkinPieDay.

Thank you for reading the post. You can celebrate every day with Happydays365.org and Happy National Pumpkin Pie Day 2020.