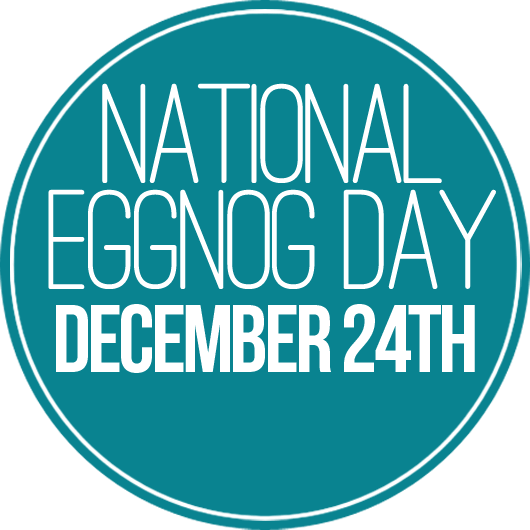 National Eggnog Day comes on December 24 of Every year. Eggnog is otherwise known as Milk Punch or Egg Milk Punch. Eggnog is a famous drink in the United States of America during the holidays. Whether buying from the stores for the whole family or made on your own Eggnog is a staple drink during the Christmas season. Eggnog is a chilled, sweetened, rich, and cream diary-based Beverage. It is made with milk, cream, sugar, whipped egg, and sometimes they add distilled spirits such as rum, brandy, or bourbon.

The exact origin and the founder of National Eggnog Day are still unknown. The first time the term “Eggnog” was first mentioned in a poem written by Philologist Jonathan Boucher and clergyman. Unfortunately, the poem is not published until 30years after the death of Jonathan Boucher. The lines of the poem went like this,

“Fog-drams in the morn, or better Still Eggnog. At night hot-suppings, and at mid-day Grogg. My palate can regale.”

On March 26th, 1788 the term “Eggnog” was printed in New-Jersey Journal. It refers to the young man drinking the Eggnog. There is a debate about the origin of Eggnog. Some believe that it is originated from East Anglia, England and some think that it came as a Medieval European beverage made with milk. The milk curdled up when mixed with wine or ale and then flavored with spices.

How to make Eggnog

Other Celebrations on December 24

December 24 is also celebrated as

How to celebrate National Eggnog Day

Celebrating National Eggnog Day is quite simple and easy to remember. Gather the full family and enjoy with a glass or two of Eggnog whether you buy from the store or made on your own. Then take pictures while eating Eggnog and share them with others on social media by using the hashtag #EggnogDay.

Thank you for reading the post. You can celebrate every day with Happydays365.org and Happy National Eggnog Day 2020.