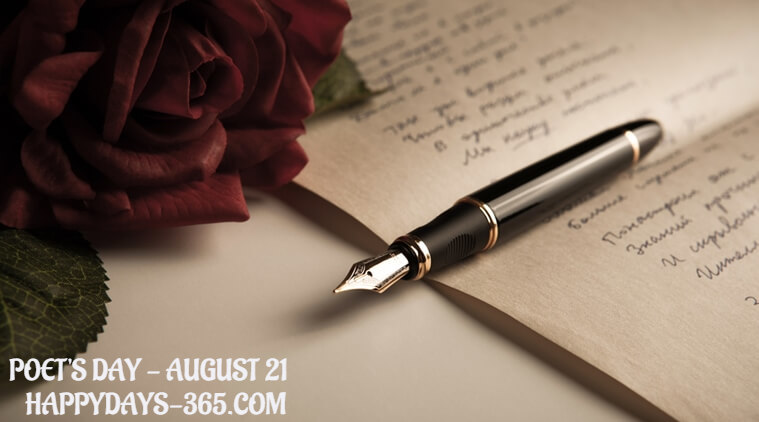 Poet’s Day is celebrated on August 21 of every year. We would have come across lots of poems from our childhood most probably on the English textbooks. Both the poetry and poets are something that is celebrated at any occasion. Of course, some of you would have written it yourself if you are too much imaginative. What so ever, the Poet’s Day is celebrated to appreciate the poet’s and poems. The celebration of the day began as a form of dedication to the history of poetry and also to honour those poet’s who has done extraordinary work to bring out their quality poems to the world. Celebrate Poet’s Day by writing a poem with any theme to make the day more enjoyable.

“Every heart sings a song, incomplete until another heart whispers back. Those who wish to sing always find a song. At the touch of a lover, everyone becomes a poet.” – Plato

The history and origin of the Poet’s Day are anonymous. The title itself makes it evident that this day is celebrated as a form of tribute or honour to the world’s most creative personalities who writes poems. A poet is a person who will write poetry, and they may describe themselves as Poets or others will describe them as such. A poet may solely be a writer of poetry or may perform their art to an audience. The poem by a poet is a form of literature which uses aesthetic and rhythmic qualities of language. It includes sound symbolism, phonaesthetics, and meter that elicit the meanings in addition to, or in place of, the prosaic ostensible meaning. The poem by a poet is a form of communication that either expresses his ideas in the literal sense in bringing out the meanings deeper rather than giving the mere definition of the words. Poets have lived since antiquity, in all languages, and their poem creativity varies considerably according to different cultures and time periods they lived.

Poets of prehistoric times were usually well learned, and highly educated people whereas others were to a large extent of self-educated people. Poetry in the ancient period is defined such as Aristotle’s Poetics, focused on the practices of speech in rhetoric, drama, song, and comedy. During each civilization and languages, poets have used different styles that have changed through the course of literary history, thus resulting in a history of poets as diverse as the literature they have written. From the mid 20th century, the poetry has been more generally regarded sometimes as a fundamentally creative act of employing language. The poets often adapt forms, styles, and techniques in today’s increasingly globalized world from different cultures and languages. The one most notable person who best relates to the poet’s day is William Shakespeare who was an English poet. He is often named as England’s national poet, and has a title called “Bard of Avon.” Shakespeare’s body of work is now the foundation for the study of poetry in the college’s everywhere in the world, and his work is considered to be the supreme pinnacle of the art by many people.

Other Celebrations on August 21

August 21 is also celebrated as

How to Celebrate Poet’s Day

There are lots of best way in which you can celebrate the Poet’s Day and one simple way to surf the web and find the best poems written by various poets. As poems and poets history date back to several million years, you will get lots of interesting poems. Understand the poem and find out the emotions, feelings, and experience of what a poet has explained through his words. Learn how to write the best poem by analyzing each of the poems you had chosen.

One another way is to indulge yourself in writing poetry. Start from scratch by choosing different themes. Bring out your inner talents of writing poems on this beautiful day. Write your imagination until you feel it a poem. No matter even if your initial works doesn’t seem to be good as many are celebrating Bad poetry day too. So take a pen and notebook and let out the words from your heart. It is the very best form of celebrating the Poet’s Day as you are in a state to celebrate yourself being a poet. To make the best part of a poem, you, of course, need to learn all the grammatical information irrespective of any languages. Post your poems and Poet’s Day celebration pictures on social media using the hashtag #Poet’sDay.

Thank you for reading the post. You can celebrate every day with Happydays365.org and Happy Poet’s Day 2019.