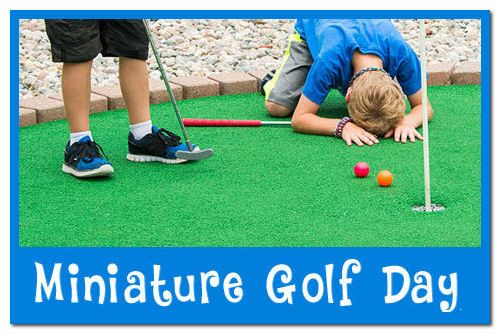 “Golf is a game whose aim is to hit a very small ball into an even smaller hole, with weapons singularly ill-designed for the purpose.” – Winston Churchill

The first person who celebrated the National Miniature Golf Day for the first time is anonymous. It is believed that miniature golf has been played around since the 1800s. Miniature golf was first invented in Scotland in 1867 by St. Andrews of the Ladies’ Putting Club. During those days, it was thought that women to use a full-sized golf club were unseemly and as a result, St. Andrews had designed a scaled-down version. It allowed women to join in the fun and play golf without imagining a scandal. Mini golf is played with a series of 9 or 18 holes. The courses are usually shorter, themed, and had a variety of obstacles that add to the difficulty of the game. The courses will be made mostly of concrete or artificial turf such that there will be no divots to replace. Miniature golf made its commercial debut in the early 20th century. They were typically available at the hotels or pricey private resorts and weren’t accessible to the general public. In 1916, a North Carolina man named James Barbar had opened the first classic miniature golf course, under the name of Thistle Dhu. The name was derived from the Scottish usage of the words “that’ll do.”  By the early 1930s, the mini-golf game had grown to become a favorite pastime across America.

Other Celebrations on September 21

September 21 is also celebrated as

Visit the local miniature golf course and play a few rounds of golf with your family and friends. You can even have miniature golf in your backyard if your home is spacious enough to play whenever you feel. Post your National Miniature Golf Day celebrations on social media using the hashtag #NationalMiniatureGolfDay.

Thank you for reading the post. You can celebrate every day with Happydays365.org and Happy National Miniature Golf Day 2021.