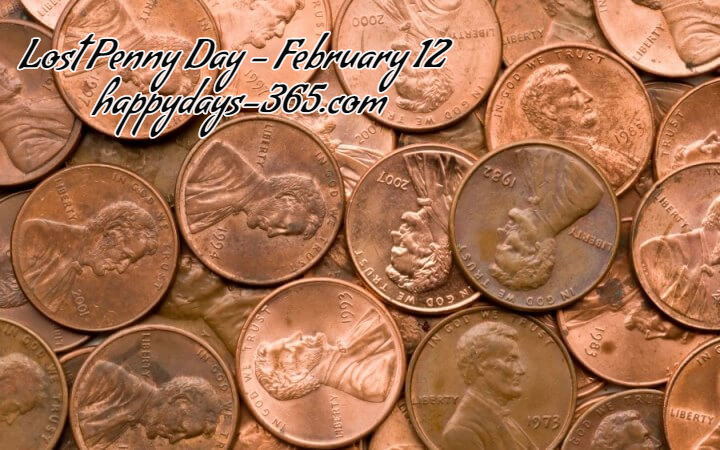 Lost Penny Day is an annual celebration observed on February 12th of every year. Unlike the currency notes, the pennies doesn’t fit into your wallets or purse. They are often small and slips down from the wallet. Of course, all of us would have lost some of the pennies. You would have placed it on the sofa, and it would have stuck in the sides or sometimes lock your outlet pipe of your washing machine. As the penny is tiny, it stays in the nooks and crannies of your home. The penny isn’t worth, yet it is quite a good sign to find the lost penny. On Lost Penny Day, you can take some efforts to find out the lost penny as on its very own special day.

“A penny saved is a penny earned.” – Benjamin Franklin

The Lost Penny Day has been in celebration since the year 1995. Adrienne Sioux Koopersmith, an eventologist has come up with this idea and thus founded this special day for the lost penny. The penny has a long history and has been in usage since the year 1780s. Benjamin Franklin was the first ever person to design the first U.S. penny. He had introduced the first penny in the year 1787. Since then, several billion pennies have been minted. The penny we are familiar now has lots of images and depictions. The first of all the pennies have adorned with the image of late American president Abraham Lincoln in the year 1909. The date is precisely chosen as it was on February 12, 1909, that commemorate Lincoln’s 100th birthday anniversary. It was the same image that was printed on the pennies from the year 1959 to 2008.

Other Celebrations on February 12

February 12 is also celebrated as

How to Celebrate Lost Penny Day

The best way to celebrate the Lost Penny Day is to make yourself indulge in searching for the lost penny.  Research to know more about the pennies, its history, types and kinds of pennies till date. It is the perfect time to start looking for the penny which you have lost or kept it somewhere forgotten. Hunt for them in every nook and corner of your home. Ask your children and family members to indulge in this fun activity. Well, who doesn’t like to get good luck when finding the lost penny gives that. Collect all the lost pennies you have found and donate it to the good cause or give to those who need it like those who are homeless. Share the pictures of your fun penny searching moments and valuable donation of pennies on the social media using the hashtag #LostPennyDay.

Thank you for reading the post. You can celebrate every day with Happydays365.org and Happy Lost Penny Day 2020.