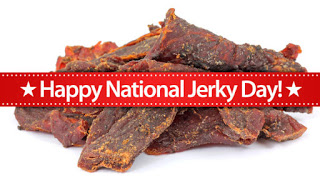 The National Jerky Day was created by Jack Link in the year 2012. Since then it is being celebrated on the 12th of June every year. Jerky is lean meat dried with added salts to prevent the bacteria from attacking the meat. Jerky is derived from the Spanish word “Charqui” which means to burn the meat. The jerky is less in weight and it has a high level of nutrition. Since 1996 it is been Jerky has been selected as space food by Astronauts during their space travels.

The nutrient filled meat is made lightweight during drying. The pound of meat will weigh less than four ounces when dried and made into Jerky. Jerky can be stored and preserved for many days without any refrigerator as the moisture is removed completely from it. Jerkies are available in nearby stores, supermarkets and variety shops everywhere. In Tamil Nadu, India, Jerky is called as Uppu Kandam which is part of their traditional Non-Veg Cuisine. In Ethiopia, Jerky is called as Qwant’a.

How to Celebrate National Jerky Day

Celebrate Jerky Day by learning the health benefits of Jerky when consumed and make others aware of it as well. You can also celebrate by preparing Jerky in its traditional way and sharing the prepared jerky with your family and friends. If you are not able to prepare, You can buy some Jerky from a nearby shop and consume it on this special day. Share your experience about consuming Jerky and its health benefits and create an awareness of this day using the hashtag #HappyNationalJerkyDay.

Thank you for reading the post. You can celebrate every day with Happydays365.org and Happy National Jerky Day 2021!