International Day in Support of Victims of Torture – June 26, 2021

by Avinesh | Jul 8, 2021 | Important Days in June, International Day in Support of Victims of Torture 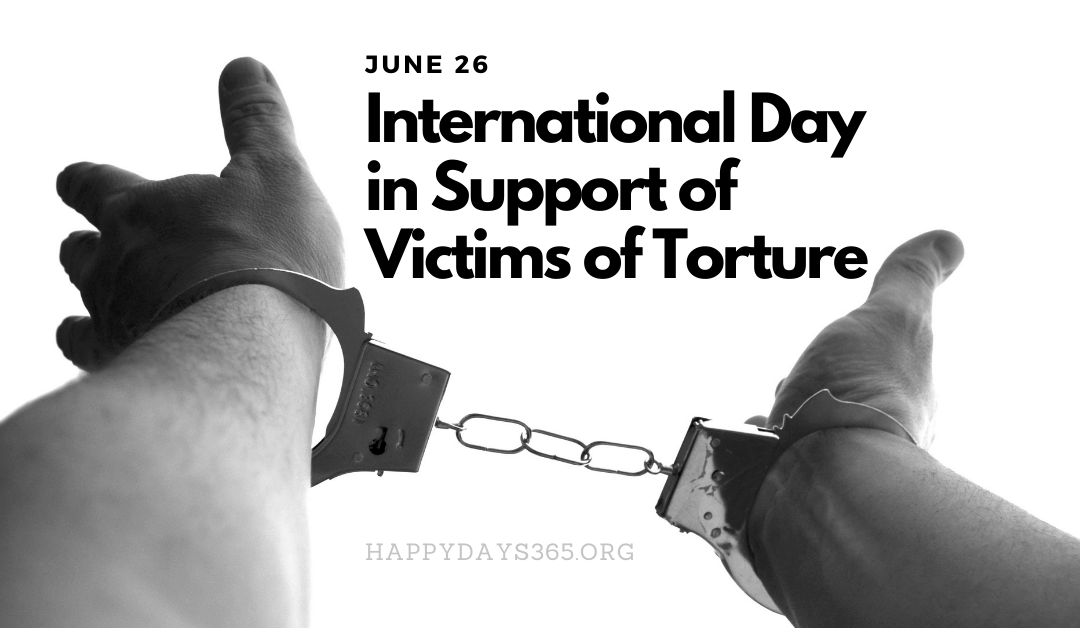 Torture is an act of causing pain to someone in a physical or mental way. This leads a person to several complications to lead a steady life and leave them in a severe mental struggle. In the Olden day, there are several torture method and instruments are used to punish the crimes which are brutal. Because of this many end up dead, mentally ill, and some even psychotic. On several occasions, the victims have not even committed the crime but they were arrested by misunderstanding and tortured. So taking all this under consideration, the International Day in Support of Victims of Torture was formed. Let’s see more about the day in the upcoming article.

History of International Day in Support of Victims of Torture

The United Nations General Assembly has selected the day for two reasons. They are the first international instrument obliging UN members to respect and promote human rights was signed in the midst of World War 2 on June 26, 1945, and on June 26, 1987, United Nations Convention was against Torture and Other Cruel, Inhuman or Degrading Treatment or Punishment came into effect. Finally, the day was confirmed by the proposal of Denmark which is home to the world-renowned International Rehabilitation Council for Torture Victims (IRCT). After that, the event was celebrated on June 26 every year. So let’s see how the day is celebrated in the article below.

The Day is celebrated with lots of events, celebrations, campaigns, and many more. On this day, there will be several rehabilitation centers that will be started to helps the people who suffered those torture and led happy life. You can also share the thought about the day on Social media platforms like Facebook, Instagram, Twitter, Reddit, etc. with the hashtag #InternationalDayinSupportofVictimsofTorture.

More about the Day

This is a day on which we pay our respects to those who have endured the unimaginable. This is an occasion for the world to speak up against the unspeakable. It is long overdue that a day be dedicated to remembering and supporting the many victims and survivors of torture around the world.

On this International Day in Support of Victims of Torture, we express our solidarity with, and support for, the hundreds of thousands of victims of torture and their family members throughout the world who endure such suffering. We also note the obligation of States not only to prevent torture but to provide all torture victims with effective and prompt redress, compensation, and appropriate social, psychological, medical, and other forms of rehabilitation. Both the General Assembly and the Human Rights Council have now strongly urged States to establish and support rehabilitation centers or facilities.

Thank you for reading the article. Hope you have more knowledge about the day. Celebrate every day of your life with Happydays365.org.