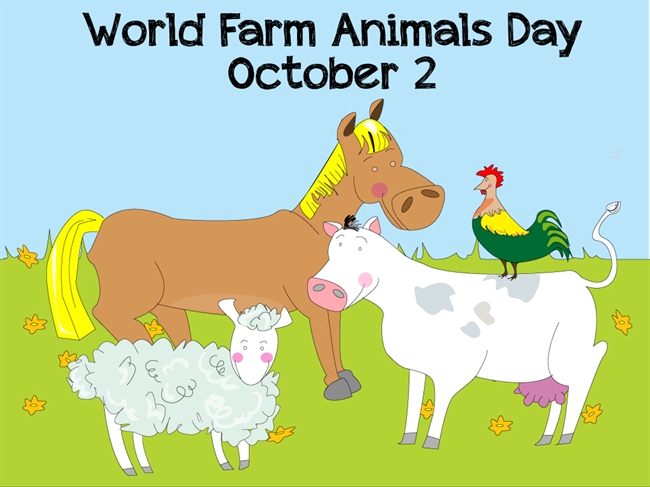 World Farm Animals Day is commemorated on October 2nd of every year. Farm animals are indeed playing a significant role in providing food for humans. Most often they are raised for their flesh and by-products. They are slaughtered for food. The death of these sentient animals might be taken into notice and World Farm Animals Day is observed to bring in some form of improvements to their lives.

“The greatness of a nation can be judged by the way its animals are treated.” – Mahatma Gandhi

World Farm Animals Day is also known as World Day for Farmed Animals (WDFA). It was founded in 1983 by an international campaign of the Farm Animal Rights Movement. The day brings in some awareness about the pain of the animals that are killed for food. The aim of the observance is to provide a more compassionate world where animals are no longer viewed as commodities. Billions of farm animals were killed for meat, eggs, and dairy in the factory farms and slaughterhouses globally. The day aims at saving those animals which are heartless slaughtered and put to death ultimately for the need of man’s need.

Even animals raised on small family farms are enduring many of these abuses. Irrespective of the place they were raised, every farm animal raised for food is facing a gruesome slaughter. World Farm Animals Day works to reveal mourn and honor the torturous and suffering of the death of cows, goats, sheep, pigs, turkeys, chickens, and other animals that are primarily raised for food. Over the years, this day was now celebrated and supported by approximately 500 communities from all over the world.

Other Celebrations on October 2

October 2 is also celebrated as

Celebrating World Farm Animals Day is very simple. The best way is to become a veggie and thereby eating only vegetarian foods. Encourage your family and friends to avoid eating the foods made from killing those farm animals. Let them know the sufferings they encounter when they were killed by taking them to the slaughterhouse. Share using the hashtag #WorldFarmAnimalsDay on social media.

Thank you for reading the post. You can celebrate every day with Happydays365.org and Happy World Farm Animals Day 2021.