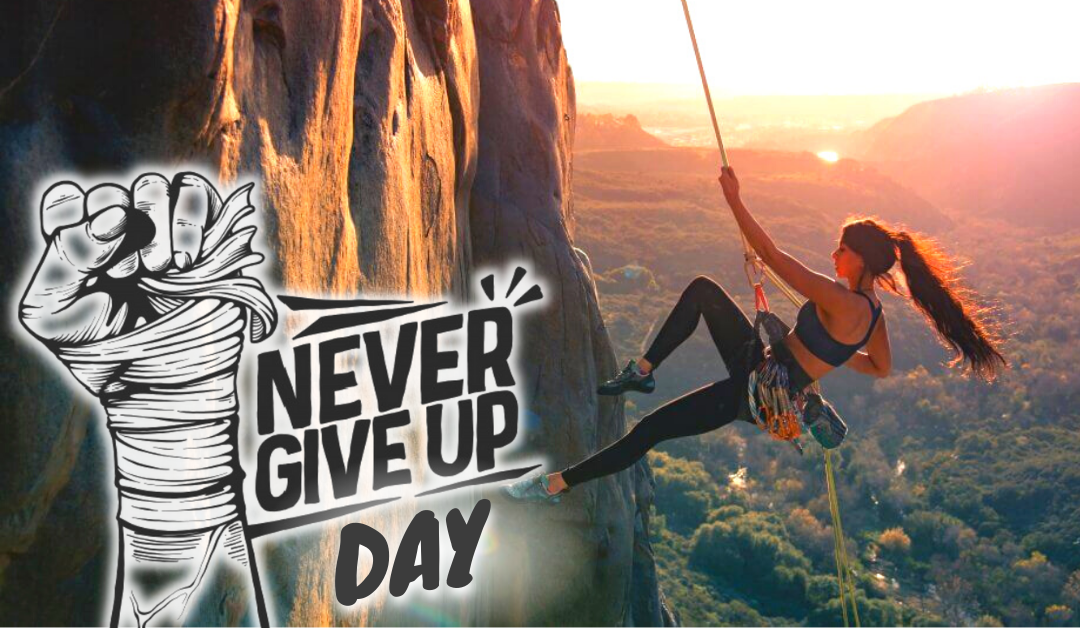 Never Give Up is one of the most popular sayings which has motivated several people around the world to achieve greater heights in their field. It is no bad to fail and try on anything you love, but it is bad if you giving up on what you love without even trying it. The Never Give Up day is celebrated on August 18th of every year. It celebrated as an appreciation for those who never give up on their dreams and also a reminder of how important your dreams are. So no matter what Never Give Up on your dreams even the world is against you!

Quotes About Never Give Up Day

“Character consists of what you do on the third and fourth tries.”
-James A. Michener

“Survival can be summed up in three words―never give up. That’s the heart of it really. Just keep trying.”
-Bear Grylls

“If you fall behind, run faster. Never give up, never surrender, and rise up against the odds.”
-Jesse Jackson

“How long should you try? Until.”
-Jim Rohn

“It does not matter how slowly you go as long as you do not stop.”
-Confucius

“There is no failure except in no longer trying.”
-Elbert Hubbard

“Our greatest weakness lies in giving up. The most certain way to succeed is always to try just one more time.”
-Thomas Edison

“You just can’t beat the person who won’t give up.”
-Babe Ruth

“You do what you can for as long as you can, and when you finally can’t, you do the next best thing. You back up but you don’t give up.”
-Chuck Yeager

“Never give up on something that you can’t go a day without thinking about.”
-Winston Churchill

“Never give up, for that is just the place and time that the tide will turn.”
-Harriet Beecher Stowe

“Most of the important things in the world have been accomplished by people who have kept on trying when there seemed to be no hope at all.”
-Dale Carnegie

The day is celebrated by encouraging yourself to not giving up. Also, you can motivate your friends and family to follow their dreams and not to give up on them. In the modern world of technology, you can share some inspiring stories of your yourself or someone you know on the internet about how they pursue their need by never giving up. You can even use social media platforms like Facebook, Twitter, Instagram, etc. to post something via text, image, video, podcast, etc about the day with the hashtag #NeverGiveUpDay.

Famous Personalities Who Never Give Up

Here are some of the popular personalities who inspire us never give up on your dreams.

Bill Gates dropped out of Harvard to start Microsoft and now he is one of the top 5 billionaires in the world with a net worth of about 13,040 crores USD.

Michael Jordan was cut off from his high school basketball team and now he is one of the greatest and most celebrated basketball players in the World.

J.K. Rowling’s Harry Potter novel has been rejected over 12 times but now Harry Potter movies one of the most successful movie franchise in the world.

Walt Disney was fired from a newspaper company for lack of creative ideas and then started an animation company in 1921 which got bankrupt. But now Disney Pictures is one of the movie production brands in the world.

Lionel Messi has been cut off from the Football team because of his smaller stature (Growth Hormone Deficiency). Now he is one of the greatest football in the world and a 5 times Ballon d’Or winner.

Hope you get inspired by the article. You can celebrate every day with Happydays365.org and Happy Never Give Day 2021.