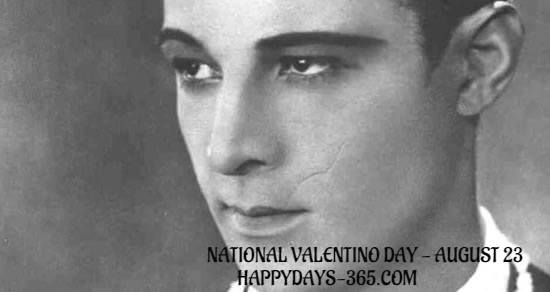 “Some of the tributes that have affected me the most have come from my ‘fans’ – friends – men, women, and little children. God bless them. Indeed, I feel that my recovery has been greatly advanced by the encouragement given me by everyone.” – Rudolph Valentino

The first person to observe Valentino Day is anonymous. The commemoration of the day, however, marks the death of an Italian actor and naturalized American Rudolph Valentino. He was born in Castellaneta, Apulia, the Kingdom of Italy as Rodolfo Pietro Filiberto Raffaello Guglielmi di Valentina d’Antonguella on May 6, 1895. During the 1920s, he was a sex symbol, an early pop icon who was known as the “Latin lover” or just as “Valentino.” The Four Horsemen of the Apocalypse of Valentino released in 1921 was a commercial and critical success. The Sheik was apparently his most famous film. Other notable movies of Valentino includes Broken Blossoms and Four Horsemen. Blood and Sand which was one of the four top-grossing films of 1922. On August 15, 1926,  Rudolph Valentino was hospitalized at the New York Polyclinic Hospital after diagnosing that he was suffering from appendicitis and gastric ulcers, and which required an immediate operation. Even after several treatments, his body didn’t react. On the early hours of August 23, Valentino was briefly conscious and conversed with his doctors about his future. However, he fell back into a coma stage and died a few hours later, at the age of 31. The death of Rudolph Valentino made his fans fall into immense grief. Thus, they memorialize this day as a form of paying tribute to Valentino.

Other Celebrations on August 23

August 23 is also celebrated as

How to Celebrate National Valentino Day

Thank you for reading the post. You can celebrate every day with Happydays365.org and Happy National Valentino Day 2019.