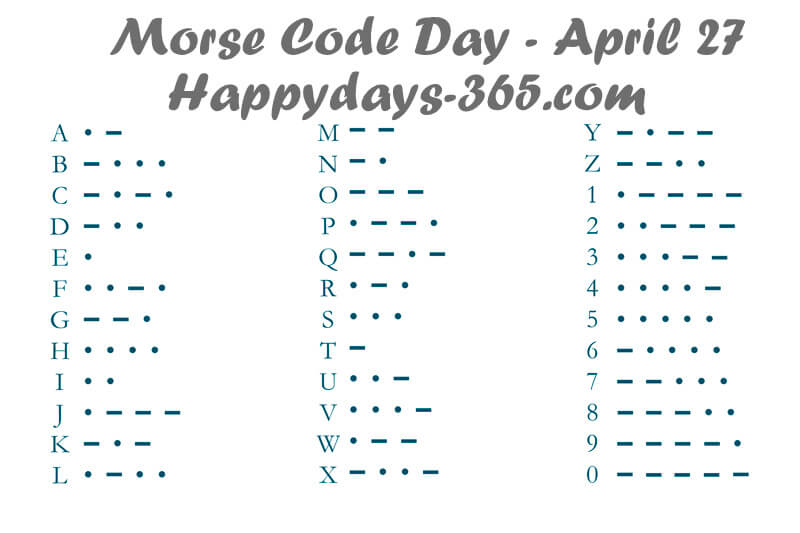 Morse Code Day is celebrated on April 27 of every year. Morse code is a way to transmit text through a series of signals. Each character or alphabet in a language is represented by a sequence of dots and dashes that can be directly recognised by a skilled listener or spectator without specialised equipment. It is called for Samuel F. B. Morse, an inventor of the telegraph. Morse code has been in practice for nearly 160 years—longer than any other electrical coding system. The language has found its way into Aviation, Amateur Radio, and can even be transmitted by flashing lights. Additional significant use of this communication is to help those with disabilities be able to interact through simple tapping, or even through a skin buzzer.

“Morse conquered his electrical difficulties although he was only a painter, and I don’t intend to give in either till all is completed.” – Alexander Graham Bell

Morse Code Day is to commemorate the birthday of Samuel Morse, co-developer of Morse code. He was an American painter and contributed to the invention of a single-wire telegraph system based on European telegraphs. He invented the telegraph as a means of rapid long-distance communication as he was unable to see his dead wife due to the slow connection. In a letter to a friend, Morse explains how vigorously he fought to be called the sole creator of the electromagnetic telegraph despite the previous inventions.

Other Celebrations on April 27

April 27 is also celebrated as

How to celebrate Morse Code Day

Morse Code Day can be best observed by learning the Morse code. Morse Code is the way to learn fun & new language and use it with one’s friends. On this day one can read about the history of Morse code and its inventor. You can also spend some time on learning more about the role Morse code has played in the society. Post pictures and share your Morse Code Day celebrations on social media by using the hashtag #MorseCodeDay.

Thank you for reading the post. You can celebrate every day with Happydays365.org and Happy Morse Code Day 2020.