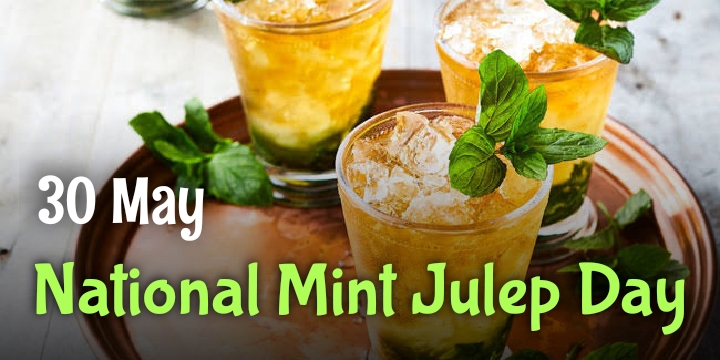 National Mint Julep Day is an annual celebration and is feasted on May 30th of every year. Mint and its flavor will give a good refreshment for those who consume it in any way.  Mint Julep is one among them and is a famous cocktail drink to sup during the hot summer days. It is a bourbon-based cocktail since bourbon is used as the primary ingredient in the mint julep. This cocktail drink has gained so much of fans and thus has ended up in the creation of National Mint Julep Day. It is a Day for those who are eagerly waited for a perfect excuse to raise their glasses to sip the refreshing mint julep, a cocktail drink.

“If you’d asked me at 30 where I’d be during the Masters when I was 46, I’d have pictured myself on a boat fishing, smoking a cigar, drinking a mint julep and watching it on television.” – Jack Nicklaus

The history and origin of the National Mint Julep Day are unknown. The creator and its first observance are found to be anonymous. However, the history and tradition of the mint julep can be traced back to as early as 1784. Mint Julep is a cocktail or a mixed alcoholic drink in which bourbon, water, crushed or shaved ice, along with the fresh mints are used as the primary ingredient. It is a bourbon-based cocktail, a refreshing southern classic that is connected with the American South and is placed in the cuisine of the Southern United States in general. Most often it is a traditional drink associated with the Kentucky Derby. The preparation of the mint julep may vary from one bartender to another. The mint juleps were traditionally served in the silver or pewter cups which is held only by the top and bottom edges of the cup. With this, the frost will be formed on the outside of the cup. In the present days, the mint juleps cocktail drinks are most commonly served either in a tall old-fashioned glass, Collins glass, or in the highball glass with a straw.

Other Celebrations on May 30

May 30 is also celebrated as

There are possibly many ways in which you can celebrate National Mint Julep Day. Excuse yourself to sip a high glass filled with the mint julep, to begin with, the mint julep celebration. There were more than 120,000 mint juleps variants available, and you could probably taste the one which you haven’t tried earlier. Organize a get-together with your friends and family for a mint julep party and serve them with the different version as a way to celebrate this Day in a group. Make sure you drink little enough of mint julep. Share your thoughts about mint julep along with the pictures of your favorite mint julep cocktail drink on the social media using the hashtag #MintJulepDay.

Thank you for reading the post. You can celebrate every day with Happydays365.org and Happy National Mint Julep Day 2021.