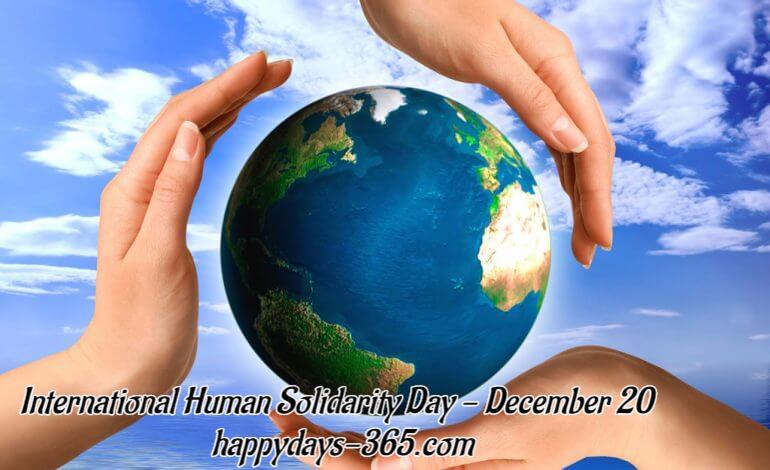 International Human Solidarity Day has been celebrated on December 20th of every year. Solidarity is mutual support or union of interests within a group of people. Without unity, things aren’t possible and in such a way solidarity binds the people. Celebrate unity in diversity with the commemoration of this Day. International Human Solidarity Day is celebrated to remind people from all over the world about the need for unity. Day also promotes and raises awareness about the importance of solidarity. It is a day of action that is observed to encourage new initiatives for the eradication of poverty.

“This celebration here tells me that this work is not hopeless. I thank you for this teaching with all my heart and lift my glass to human solidarity, to the ultimate victory of knowledge, peace, good-will and understanding.” – Albert Szent-Gyorgyi

The International Human Solidarity Day is celebrated since the year 2006. The UN General Assembly on December 22, 2005, had proclaimed that the Day would take place on December 20 each year. The Assembly has identified by resolution 60/209 that solidarity as one of the fundamental and universal values. The resolution has underlain the relations between the peoples in the Twenty-first Century. The world leaders in the Millennium Declaration has agreed that solidarity as a value that was important to the international relations in this century. Solidarity is referred to as one of the six principles of the Charter of Fundamental Rights of the European Union.

The celebration Day helps in recalling people about the importance of solidarity for the execution of the international agreements on social development. It includes the programmes of action of the international conferences and multilateral accords. The UN has realized that in the light of globalization and growing inequality, there is a need for strong international solidarity and cooperation. According to the UN, solidarity is needed to achieve its Millennium Development Goals. The UN was founded on the basic idea of unity and harmony through the concept of collective security. To unite for international peace and security, the UN relies on its members’ solidarity. Since the birth of the Organization, the concept of solidarity has defined the work of the United Nations.

The objective of the Day is to eradicate poverty, and thereby it promotes human and social development in the developing countries. It mainly works in helping among the poorest segments of the populations. The International Human Solidarity Day is a celebration day that celebrates our unity in diversity. It is a day to remind governments to respect their commitments to international agreements. The Day raises public awareness of the importance of solidarity. It is a Day that encourages debate on the ways to promote solidarity for the achievement of the Millennium Development Goals including the poverty eradication.

Other Celebrations on December 20

December 20 is also celebrated as

Celebrating the International Human Solidarity Day is quite simple. You can participate in the events as a way to promote solidarity among the people. Indulge yourself in the combat against poverty, corruption and terrorism. Help the people who are in need of basic needs and provide them with medical assistance. Educate people about the need for universal education. It is up to you in whatever ways you can provide your help and support to those people. Share your Solidarity Day celebrations on social media using the hashtag #HumanSolidarityDay.

Thank you for reading the post. You can celebrate every day with Happydays365.org and Happy International Human Solidarity Day 2019.