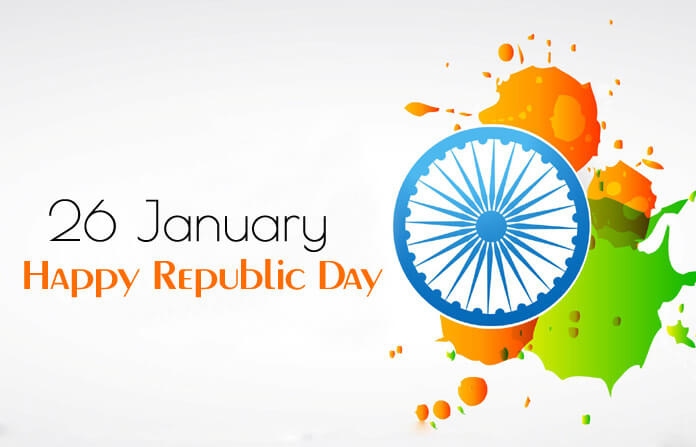 Republic Day is a special and momentous occasion for India and the people living in India. Republic day in India is observed every year on 26th January to honor the Constitution of India as it was drafted on the same day in the year 1950. It was the day the Constitution of India, prepared by a drafting committee headed by BR Ambedkar. The day is officially celebrated every year in the national capital of the country at Rajpath in the presence of the President. It is also observed in other states of the country. Indian Republic Day is a national holiday for the country and the day represents the true spirit of independent India.

“We are Indians, firstly and lastly.” – B. R. Ambedkar

History of Republic Day in India

India celebrates Independence day because of the freedom from British rule; Republic day is celebrated for the coming into force of its constitution. A constitution was prepared and submitted to the assembly on 4th November in the year 1947. On 24th January of 1950, the first draft of Indian constitution was signed in both Hindi and English by the national assembly. Then the constitution of India came into effect on 26th January of 1950 which is celebrated as Republic day of the country. On the very same day India was declared as Purna Swaraj which means complete freedom and thus the day was started to celebrate every year as the anniversary of the Purna Swaraj. The first Indian Republic Day was dedicated three years after the independence of the country in 1950. On January 26, 1950, the first President of India, Dr Rajendra Prasad took an oath at Durbar Hall of government house. The constitution was drafted in such a way that the citizen’s of India could select their government.

“Let new India arise out of peasants cottage, grasping the plough, out of huts, cobbler and sweeper.” – Swami Vivekananda

“India has no dearth of brave young men and women and if they get the opportunity and help then we can compete with other nations in space exploration and one of them will fulfil her dreams.” – Atal Behari Vajpayee

“The new republic should be based on diversity, respect and equal rights for all.” – Evo Morales

“Citizenship consists in the service of the country.” – Jawaharlal Nehru

“Democracy means nothing if people are not able to work the democracy for the common good.” – Chandra Bhushan

“At the dawn of history India started on her unending quest, and trackless centuries are filled with her striving and the grandeur of her success and her failures. Through good and ill fortune alike she [India] has never lost sight of that quest or forgotten the ideals which gave her strength.” – Jawaharlal Nehru

“A nation’s culture resides in the hearts and in the soul of its people.” – Mahatma Gandhi

“Freedom In The Mind, Strength In The Words, Pureness In Our Blood, Pride In Our Souls, Zeal In Our Hearts, Lets Salute Our India On Republic Day.”

“Let us remember the golden heritage of our country and feel proud to be a part of India.”

“One Nation, One Vision, One Identity. No Nation is Perfect, it needs to be made perfect. Meri Pehchaan Mera India.”

“Never Forget The Hero’s Who Sacrificed Their Lives To Bring Up This Glorious Day To India.”

“Thousands laid down their lives for us to celebrate this day. On this 68th year of this significant day, let’s take a pledge that we will never forget their sacrifices.”

“Our life is full of colours, and I hope this 26th January, will add more colours in your life.”

How to celebrate Republic Day in India

Republic day is celebrated every year in the national capital of India, New Delhi at Rajpath in the presence of the President of India. The government of India organizes events and celebrations for the people at the Rajpath. An extraordinary parade and various events will be held by the military team and other civilians at the Rajpath in front of the Indian Gate. The ceremony will commence in New Delhi when the Prime Minister of the country offers garland at the Amar Jawan Jyothi at the India gate to pay tribute to all the sacrifices of the Indian army soldiers while serving their country. Various National Awards like Maha Veer Chakra, Ashok Chakra, Param Veer Chakra, and other Bravery Awards will be handed out to the soldiers of armed forces, ordinary people, and students. Officers of the Armed Forces perform motorcycle rides and staff from Air Force perform fly parades through fighter flights making an exciting show by the smoke. The massive celebration includes the prime minister’s rally and the Lok Tarang-National Folk Dance Festival from the 24th of January to the 29th of January. The day is celebrated even in the state capitals in the presence of the Governor by hoisting the national flag of the country.  Indian Republic Day is celebrated throughout India by the citizen of the country with great enthusiasm and joy by hosting the flag, singing the national anthem, and sharing sweets in schools, colleges, and various other institutions. Celebration brings people together as a sign of patriotism. Post Pictures and share your celebrations on social media’s like Facebook, Instagram, Twitter, and much more by using the hashtag #HappyRepublicDay or #RepublicDay,

Thank you for reading the post. You can celebrate every day with Happydays365.org and Happy Republic Day 2021.