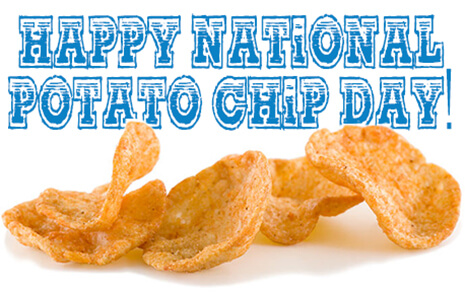 National Potato Chip Day is an annual feast celebrated on March 14th. There are lots chips available and are served as snacks, side dish, or appetizer. Not all of them are loved and favoured by all age groups of people. Undoubtedly, the thinly sliced, deep fried, and crispy salted potato chips are the ever loved snack time recipe. The potato chips are the world famous snacks that are liked, loved, and eaten by millions of people and especially by the children. On having gained so much of fans, the potato chips has got its own celebration day in the calendar. Fill up your mouths with a handful of crispy potato chips to treat yourself and as a way to celebrate the National Potato Chip Day in a more enjoyable way.

The National Potato Chip Day’s origin, history, and the creator are anonymous. However, the history and origin of potato chips have a long tradition, and it dates back to 1800. Back in 1853, a finicky customer named Tycoon Cornelius Vanderbilt was staying at the Saratoga Springs in New York. At the restaurant, he was served with the French-fried potatoes, and he had kept on sending it back to the kitchen complaining that they were too thick, too soggy and not salted well enough. So Chef George Crum has decided to slice the spuds as thin as possible, fried them until it becomes crispy and seasoned them with extra salt. To his surprise, Cornelius Vanderbilt loved them, and it soon became a regular item on the restaurant’s menu in the name of “Saratoga Chips.”

However, the earliest known recipe for potato chips is recorded in the William Kitchiner’s cookbook named The Cook’s Oracle and was first published in the year 1817. There were few other conflicting dates available regarding the origin of the potato chips. Initially, the potato chips were only available in the restaurants. However, the term Saratoga Chips were being widely used in the late 1870s as a standard menu on train cars and street carts. It was soon introduced in the bags into groceries and bakeries. It was found that Americans consume approximately 1.2 billion pounds of potato chips every year. Potato chips or crisps is a thin slice of potatoes that are usually fried deep or baked until crunchy. It is most commonly served as a snack, side dish, or appetizer. They are cooked and salted, and various flavourings are added like herbs, spices, cheeses, and other natural or artificial flavours.

Other Celebrations on March 14

March 14 is also celebrated as

Celebrating the National Potato Chip Day is quite simple. Have some potato chips for your lunch or dinner as a side dish. Pack some fresh potato chips for your children as snacks. You can even try making the homemade potato chips to delight your family. Add flavourings and salt according to your taste. Carry some packets of potato chips to eat it while in travel or in your picnic trips as it is the best snack companion. You can even visit a local potato chip manufacturing company to know how it is made. Share your views about Potato Chip Day and post your celebration pictures on the social media using the hashtag #PotatoChipDay.

Thank you for reading the post. You can celebrate every day with Happydays365.org and Happy National Potato Chip Day 2021.