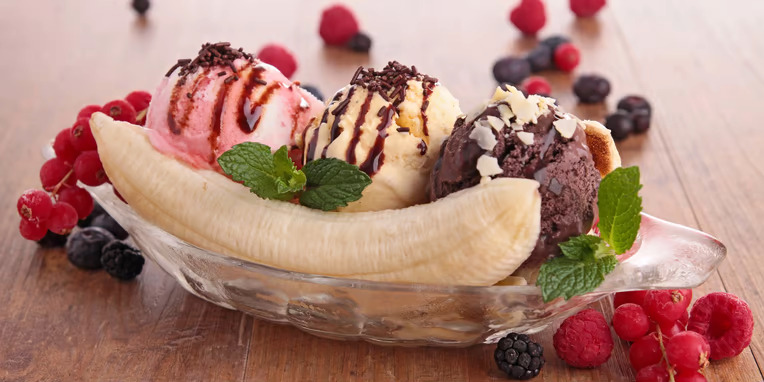 “I believe in holistic medicine, yoga, Pilates and so on. But I also believe in banana split sundaes once in a while.” – Gwyneth Paltrow

The history and origin of the National Banana Split Day date back centuries ago. David Evans Stickler prepared the first Banana Split in 1904. A 23-year-old David Evans Stickle was working as an apprentice pharmacist at Pennsylvania’s Tassel Pharmacy in Latrobe. Most pharmacies of that day David’s drug store had a soda fountain attached. He enjoyed experimenting with the new soda fountain sundaes during his free time. It was the same pharmacy where he invented the banana split. The banana split dessert combo has attracted the students of Saint Vincent College nearby the pharmacy. The acceptance of the dessert had soon become a hit among the people of America. His first banana-based triple ice cream sundae was sold for 10 cents, which was double the cost of all the other sundaes.

Traditionally Banana Split will be served in a long dish, called a boat. The boat has a banana cut in half lengthwise and the scoops of strawberry, vanilla, and chocolate ice cream placed in between the two slices. Hence the name Banana Split. The strawberry ice cream has a pineapple topping. The chocolate syrup will be poured on the vanilla ice cream, and chocolate ice cream has a strawberry topping. Now swirl the whipped cream over each ice cream scoop. The entire boat will be garnished with crushed nuts and maraschino cherries. Lately, in 2004, Latrobe had hosted the 100th anniversary of the Banana Split. NICRA (National Ice Cream Retailers Association) on the same year certified it as the birthplace of the banana split.

Other Celebrations on August 25

August 25 is also celebrated as

Celebrating the National Banana Split Day needs no more explanation. All you need to do to buy bananas and cut them into two slices. Place the scoops of ice creams in between the two banana slices and add some toppings. Now serve it for your friends and family with an invitation to celebrate this century-old dessert. You can even go to the ice cream parlor to taste the new varieties. Post your celebrations on social media by using the hashtag #NationalBananaSplitDay.

Thank you for reading the post. You can celebrate every day with Happydays365.org and Happy National Banana Split Day 2021.