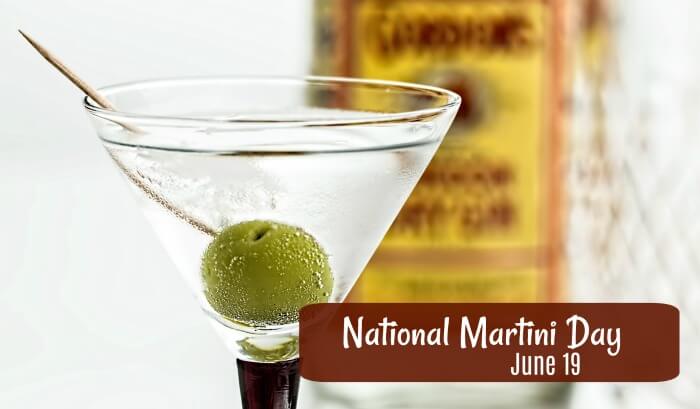 National Martini Day is started on June 19th on every year. The Martini is a cocktail which is made with the gin and the vermouth. Sometimes, vodka is substituted for the gin, although this is appropriately called the vodka martini or vodkatini. The drink is almost always garnished with the olive or less commonly a sliver of lemon peel. It is often described as being crisp. The Martini is one of the best well known mixed alcoholic beverages over the years, and it is also added to many variations, and other flavors too have evolved such as the cosmopolitan, appletini or chocolatini.

“I like to have a martini, two at the very most –After three I’m under the table, After four, I’m under my host.”  – Dorothy Parker

The History and the founder of the National Martini Day are unknown. It is celebrated on June 19th. By 1922 the Martini has reached its most recognization from the London dry gin, and the dry vermouth are combined at the ratio of 2:1, it is stirred in a mixing glass with the ice cubes, the orange peels can be added optionally, then it strained into a chilled cocktail glass. Over time it becomes the expected choice for the many drinkers. There are also various flavors available in the Martini which are added by time. The perfect Martini uses equal amounts of sweet and dry vermouth.

How to Celebrate National Martini Day

The National Martini Day can be celebrated quickly, try making a martini for the first time at home. If you have not tried making a martini at home, please try out the classic martini, If you are a cocktail master, take today to try out the new one you have never tasted. Gin Martini, Espresso Martini, Lemon Martini, Cranberry Martini, Grapefruit Martini, the possibilities are endless. You can text or call your friends and Go out to the Martini bar. Then you can order the Martini of your favorite and enjoy the National Martini Day! You can share your views and thoughts on the social media using the hashtags #NationalMartiniDay.

Thank you for reading the post. You can celebrate every day with Happydays365.org and Happy National Martini Day 2020.