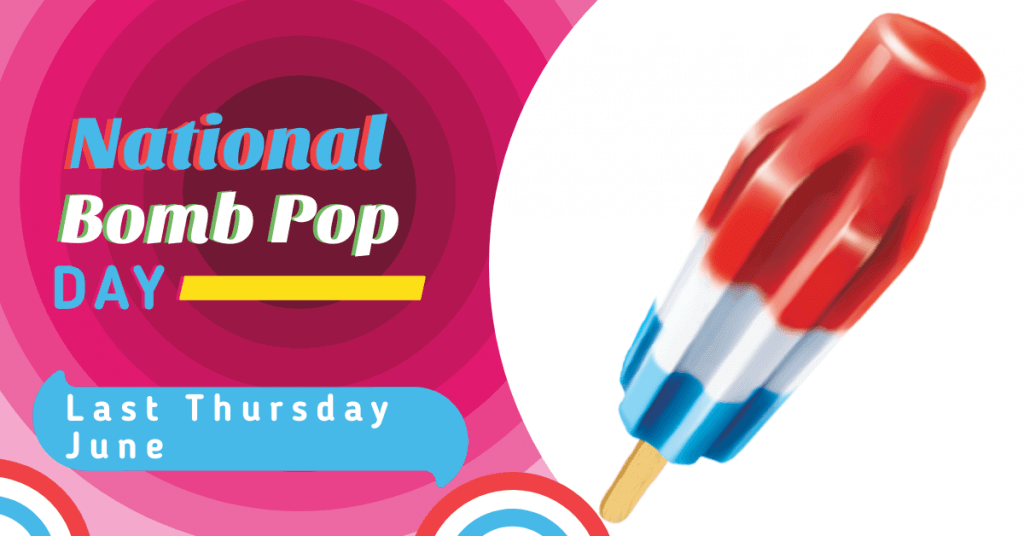 National Bomb Pop Day is observed on the last Thursday of every June. In 2021, it is celebrated on June 24. Bomb pops are frozen delicacy originally made in rocket shape with red, blue and white color, and Wells Enterprise currently manufactures it. These frozen pops are best enjoyed during summertime. Original flavors of Bomb pop includes Cherry, Lime, and Blue Raspberry.  But now there are more than ten flavors added to it like, WARHEADS, Hawaiian Punch, Watermelon, Jolly Rancher, Original Sugar-Free, Banana Fudge, and Tongue Splashers. You can easily buy a bomb pop from a grocery shop that is available nearby. People of all ages have enjoyed this dish since 1955. National Bomb Pop Day honor and celebrates bomb pop.

“I like freedom. I wake up in the morning and say, ‘I don’t know, should I have a popsicle or a donut?’ You know, who knows?” -Oscar Nunez

National Bomb Pop Day was founded in 2005 to commemorate the 50th anniversary of the Original Bomb Pop. Bomb pop is also known as red, white and blue Popsicle. It was invented on July 30, 1955, in Kansas City, Missouri, by James S. Merritt and D.S. Abernethy. In 2003, a deal was made between Walt Disney Company and Wells’ Dairy to release Buzz Lightyear Bomb Pops. Blue Bunny celebrated its 50th anniversary by starting sweepstakes where two winners were taken for a trip to Disneyland, and other 50 winners were given a Game Boy Advance.

Other Celebrations on June 24

June 24 is also celebrated as

It can be celebrated by just having those bob pops in the hot summer. These Popsicles are readily available in the grocery stores of United States, get some and enjoy. You can also buy them in bulk to store them at your home to enjoy it with your friends and family. You can buy the original flavour along with other new, different flavours. You can use your creativity to try them at home. Post pictures and share your celebrations on social media by using the hashtag #BombPopDay.

Thank you for reading the post. You can celebrate every day with Happydays365.org and Happy National Bomb Pop Day 2021.