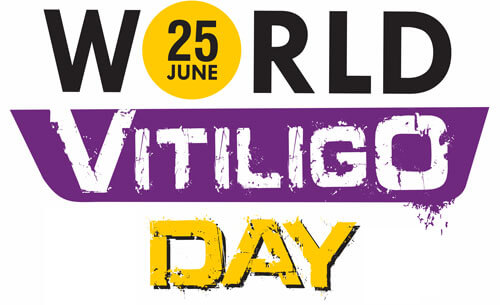 World Vitiligo Day is celebrated on June 25 of every year. The day is observed to increase global awareness about Vitiligo Disease, a frequent and often disfiguring skin disease which can have a significant adverse social and psychological effect on patients. In part because of various misconceptions still present in several regions of the world.

Steve Hargadon, the creator of the Vitiligo Friends networks, created the day to create broad awareness on vitiligo and a day dedicated to all living with vitiligo globally. On June 25, 2011, the first World Vitiligo Day was first observed. Vitiligo is an acquired disease identified by skin depigmentation, due to the destruction or malfunction of melanocytes (cells that produce melanin). June 25 was chosen as a memorial to Michael Jackson, a musical artist who suffered from Vitiligo from 1986 to his death (June 25, 2009). The first World Vitiligo Day observed at Silverbird Galleria’s Atrium in Lagos, Nigeria, with the participation of several volunteers with several kinds of experiences like dermatologists, motivational speakers, dancers, artists, comedians, patients, and much more. They are all joined by the common goal of increasing knowledge about Vitiligo. On 2012, VRF (Vitiligo Research Foundation), a nonprofit organization that aims to fund and fast-track medical analysis as well as connect investigators, care providers, philanthropists, patients, to accelerate vitiligo research and relieves the suffering of patients.

Thank you for reading the post. You can celebrate every day with Happydays365.org and Happy World Vitiligo Day 2021.