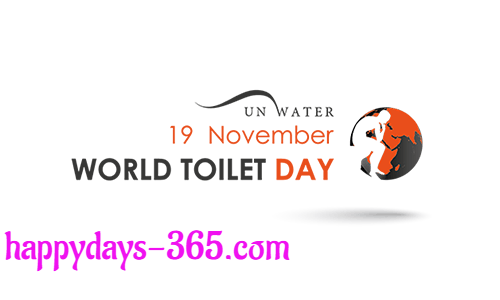 World Toilet Day is an annual awareness day celebrated on November 19th of every year. Cleanliness and sanitation is an important thing to live a healthy life. Access to clean and safe toilets is the right of any people living in the world. The toilets are an important thing in creating a strong economy, improving health and protecting the safety and dignity of people, especially with women and girls. Despite which there are about 2.5 billion people who don’t have regular and proper use of toilets. There are just under 1 billion people who continue to defecate openly. Accessing an unclean, unsafe toilet leads to the spread of several infectious diseases including cholera, typhoid, diarrhoea and more. World Toilet Day is celebrated to raise awareness about the importance of sanitation, and provide access to a cleaner, safer toilets to those who don’t have access to it.

“Although we take it for granted, sanitation is a physical measure that has probably done more to increase human life span than any kind of drug or surgery.” – Deepak Chopra

WTD was declared as an official UN day in the year 2013 as 122 countries adopted it in the 67th session of the UN General Assembly, held in New York. The WTD focuses on raising knowledge about the importance of proper sanitation and provides access to clean and safe toilets for everyone. It is an awareness Day to draw attention to the global sanitation crisis as sanitation is a global development priority. The UN and its partners believe that having a clean toilet will save lives, and increase productivity, thereby creates jobs and grow economies. The objective of WTD is to raise awareness among all sort of people who do not have access to a toilet, about the urgent need to end the sanitation crisis.

WTD regarded the practice of open-air defecation as an extremely harmful form to public health. One another objective of this awareness Day is to encourage people to do something about this sanitation crisis. The launch of the Sustainable Development Goals in 2015 has included a target that ensures everyone will have access to a safely managed household toilet by the year 2030. Sanitation or maintaining cleanliness is a human right, just like the human right to water. As sanitation systems are either ineffective or non-existent for several billion peoples in the world, there occurs an impact on health, dignity, and safety whenever there is a lack of access to sanitation. Every year, WTD has a different theme, focus or slogan as follows.

Other Celebrations on November 19

November 19 is also celebrated as

How to Celebrate World Toilet Day

There are many ways available in which World Toilet Day can be celebrated in a better way possible. The first thing is to educate people around you about the importance of sanitation. Make them use cleaner toilets and avoid defecating openly. Spread awareness that not maintaining a clean toilet will lead to several infectious diseases. Join hands with government and non-governmental organizations to spread about the need for toilets in the social media through ads. You can even participate in the Urgent Run event that raises awareness and calls for urgent action to end the sanitation crisis. Share your WTD celebrations and awareness thoughts on social media using the hashtags #WorldToiletDay or #WTD.

Thank you for reading the post. You can celebrate every day with Happydays365.org and Happy World Toilet Day 2019.