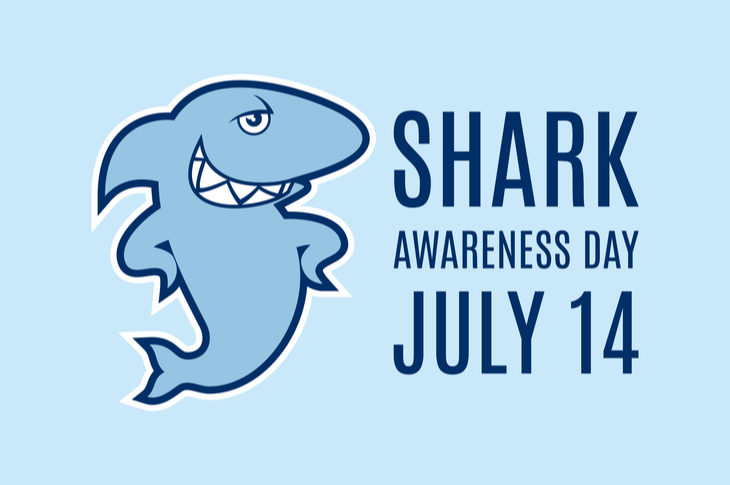 Shark Awareness Day is observed on July 14 of every year. Sharks are at more risk from humans than vice versa. The survival of many shark species is at high risk due to hunting, pollution, and climatic changes. Shark Awareness Day was created to spread awareness about the danger of sharks. Shark kills lesser humans than humans to sharks. There are around 400 species of sharks around the world and ranges from 8 inches to 50 feet in size. Sharks can detect even small drops of blood in the ocean from a long distance, and they are the significant predator in the food chain which makes them fascinating creatures. Most species of sharks are carnivorous, feeding on fishes, crustaceans, and even on seals and dolphins. Sharks are cunning hunters, but they are not picky in their eating habits. In spite of their strength and aggressiveness sharks population is continually declining due to various threats mainly because of humans. Sharks play a critical role in maintaining the food chain by removing all weak animals from the ocean and keeping the sea population healthy, and fit.

“Without sharks, you take away the apex predator of the ocean, and you destroy the entire food chain.” – Peter Benchley

The origin and history behind Shark Awareness Day are unknown. Shark Awareness Day must have been created to educate and warn people about the threats and importance of saving sharks in the oceans. Almost 74 species of sharks are marked as threatened and 11 as endangered. Sharks are majorly killed for their fins as the demand for shark fin soups is increasing in China and the Far East. These soups are priced high which motivates fishers to shoot more. Fins of sharks are considered to have medicinal properties which increase their demand. By-catch is another significant threat to sharks, which is accidentally catching sharks along with other fishes. With the rise in coastal development, pollution, reef tourism, climate changes, etc. the life of sea animals all over the world are under threat. As sharks reproduce in small numbers, the pollution of sharks is in the constant decline phase. On this day spread the knowledge and make a change to save them.

Other Celebrations on July 14

July 14 is also celebrated as

On Shark Awareness Day, create awareness and spread the knowledge on the importance of protecting monster sharks. You can learn about the role of sharks in the environment and the necessity to save them. On this day you can take a few steps to recycle the plastics, raise your voice against poaching, and can stop people from consuming sharks. Many museums around the world celebrate the day by conducting awareness programs and by teaching people about maintaining a healthy balance in the food chain. Ocean would die without them as they are the essential predators of the marine ecosystem. Often this animal is wrongly portrayed as evil killers of the ocean. So on Shark Awareness Day, you can take the initiative to save the future of sharks. Post pictures and share your Shark Awareness Day celebrations on social media by using the hashtag #SharkAwarenessDay.

Thank you for reading the post. You can celebrate every day with Happydays365.org and Happy Shark Awareness Day 2021.