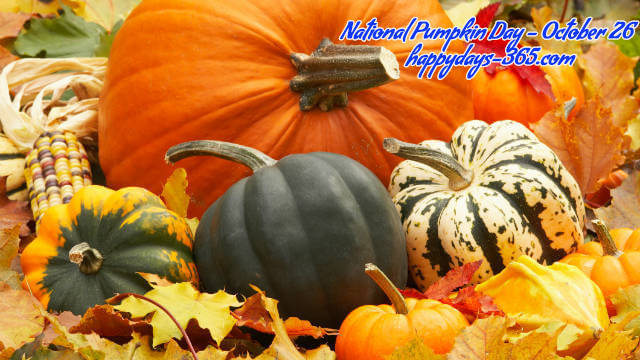 National Pumpkin Day is an annual celebration observed on October 26th of every year. Autumn begins with the harvest of Pumpkins. The Halloween month of the year wouldn’t get completed without a day celebrated for the pumpkins. It is a day for the round, smooth and bulky yellow or orange color squash, the pumpkins. Pumpkins are little more than the fun decorative veggie. National Pumpkin Day celebrates the pumpkins, its history, origin, tradition and the nutrient health benefits it gives.

“My most memorable meal is every Thanksgiving. I love the food: the turkey and stuffing; the sweet potatoes and rice, which come from my mother’s Southern heritage; the mashed potatoes, which come from my wife’s Midwestern roots; the Campbell’s green-bean casserole; and of course, pumpkin pie.” – Douglas Conant

The origin, history and the founder of the National Pumpkin Day are anonymous. However, the pumpkin has a long tradition. People usually think of the Jack-o-Lanterns and pumpkins when it comes to Halloween. However, Jack-o-Lanterns and pumpkins have no such relationship as pumpkin is a squash plant. October month is both the harbinger of the harvest period and the Halloween. Harvest period is the first sign of autumn and Pumpkins are harvested during this time. We can think that the celebration has been designated in this month for the above reason. A pumpkin is like other squash, are considered to have originated in the North America. The oldest evidence of the pumpkin-related seeds was found in Mexico that dates between 7000 and 5500 BC.

The name pumpkin has been originated from the word pepon, which is in Greek for “large melon,” something round and large. The French adapted this word to pompon and the British changed to pumpion, and the later American colonists converted it as pumpkin. The pumpkins are widely cultivated for commercial use. They are used both in food and recreation. In Canada and the United States, Pumpkin pie is a traditional part of Thanksgiving meals. The canned pumpkin puree and pumpkin pie fillings are made of different kinds of winter squash. The pumpkins are more frequently used in the decoration around Halloween and are carved as jack-o’-lantern. Pumpkins are a very versatile type of plant used for cooking in which most of its parts are edible. It is an excellent source of provitamin A beta-carotene and vitamin A and C. A fresh pumpkin has water, carbohydrate, few percent of fat and protein.

Pumpkins can be planted on every continent except Antarctica. In the recent years in the United States, the white pumpkins have become more popular. The United States produces about 1.5 billion pounds of pumpkins every year. It is round, smooth, slightly ribbed skin, with the thick shell containing the seeds and pulp. “Giant pumpkins” are a large squash that will weigh more than one tonne. It arose from the large squash of South America with the efforts of the botanical societies and enthusiast farmers. They are commercially provocative germplasm, and the United States in 1986 has extended the protection for the giant squash.

Other Celebrations on October 26

October 26 is also celebrated as

How to Celebrate National Pumpkin Day

Celebrating the National Pumpkin Day is quite simple. You can buy fresh pumpkins for your personal use in the home. Prepare some delicious dish with the pumpkins for your family and celebrate the pumpkins. You can even go to your favourite restaurant and order for pumpkin pie, pumpkin pudding or other such variety. Learn the art of carving and decorate your home with carved pumpkins during the Halloween celebrations. Get to know more about the pumpkins, its history, and origin in detail. Share your pumpkin day celebrations on the social media using the hashtag using the hashtag #NationalPumpkinDay.

Thank you for reading the post. You can celebrate every day with Happydays365.org and Happy National Pumpkin Day 2019.