Months of the Year in Turkish 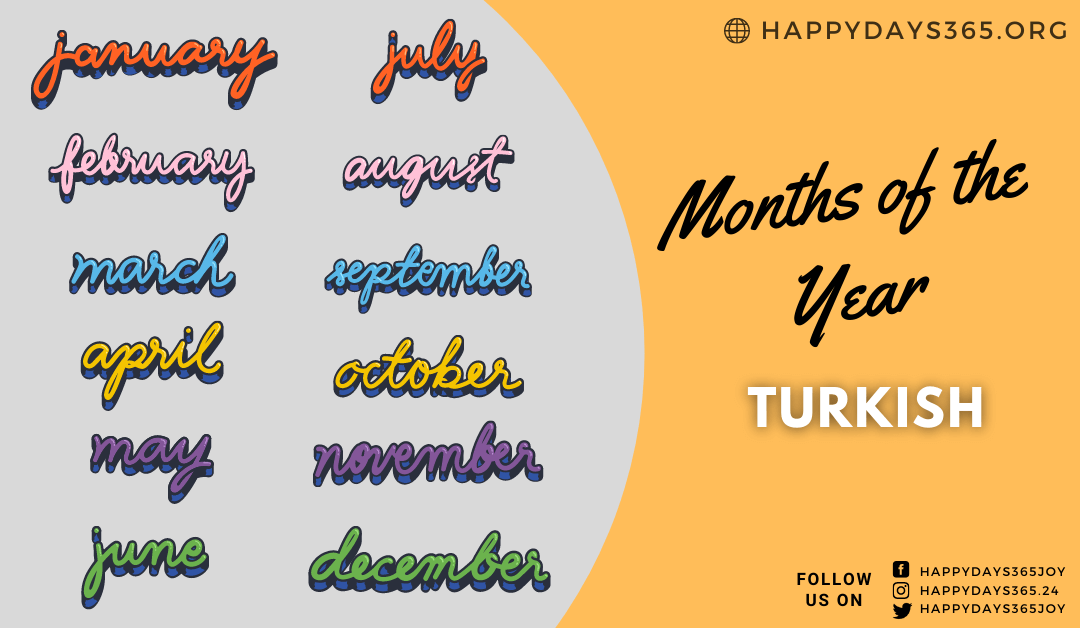 Turkey is an official language of Turkey, Northern Cyprus, and Cyprus. It has over 76 million speakers worldwide, including the second language speaker Turkish has over 88 million speakers. The early form of Turkish is known as Old Anatolian Turkish. It has two writing systems, and they are Latin (Turkish alphabet) and Turkish Braille. The language is native to countries like Azerbaijan, Iraq, Syria, Lebanon, Israel, Greece, Bulgaria, Romania, Kosovo, North Macedonia, Bosnia, and Herzegovina. The language has several dialect forms: Karamanli Turkish, Rumelian Turkish, Cypriot Turkish, Syrian Turkmen, Iraqi Turkmen, and Meskhetian. The basic order of speech or word order of Turkish is subject followed by the object and then verb. The Turkish language has official status in 38 municipalities in Kosovo, including Mamusha, Republic of North Macedonia, and Kirkuk Governorate in Iraq. In the upcoming article, let’s see how to say months of the year in Turkish.

The standard form of Turkish is referred to as Istanbul Turkish (İstanbul Türkçesi). It is the most widely spoken language under the Turkic Language family. The Ottoman Turkish Alphabet is replaced by the Latin alphabet in the year 1928 as Atatürk’s Reforms in the early years of the Republic of Turkey. In Turkish, the word month is written as ay, and the plural form of the month is written as aylar (months). So let us see how to say months of the year in Turkish.

Related: Days of the Week in Turkish

How to Say English Months in Turkish

Here let’s see how to say English months in Turkish in the table below.