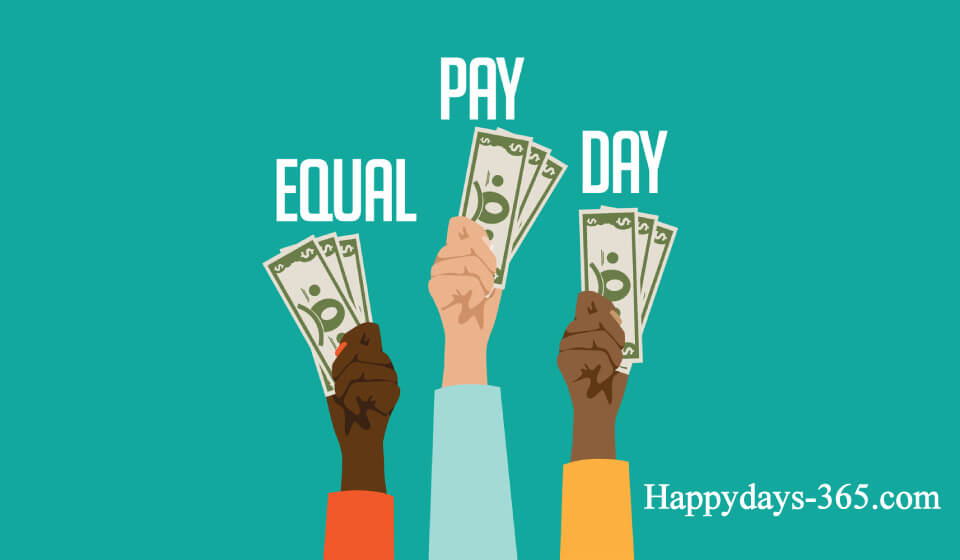 Equal Pay Day is observed in the United States on a selected Tuesday of every April. This year it is celebrated on April 10. Equal Pay Day is observed on different dates in different countries. It is dedicated to spreading awareness about the pay equality between the genders. The main aim of the day is to achieve equal pay for equal work irrespective of the gender. Research shows that women are more likely to be in junior management roles compared to men and works mainly at lower level positions. It is said that women must work approximately more than two months this year to catch up with what men were given last year. The wage gap is worse for Black and Latino women. Equal Pay Day was started to achieve real change, i.e., to fill the gap in their earnings. It is a day to fight for fair pay.

“We must ensure not only that everyone receives equal pay for equal work, but that they have the opportunity to do equal work.” – Satya Nadella

In 1996, the National Committee on Pay Equity (NCPE) commenced the equal pay day. It was started with an aim to bridge the gap between men and women’s wages. According to NCPE, women work longer for the same pay of men; women also earn less on average. The reasons for low women’s salaries are their lower willingness, motherhood penalty and their ability to negotiate salaries and discrimination. Many women’s and civil rights organisations, labour unions, professional associations work together to achieve pay equity. In 1963, President John F. Kennedy signed the Equal Pay Law, which made it illegal to give women lower rates for the same job as the male. The law prohibits gender-based discrimination and women ability to fight against the discrimination in their workplace.

Other Celebrations on April 9

April 9 is also celebrated as

How to celebrate Equal Pay Day

Equal Pay Day is celebrated by opposing against gender pay gap. It still exists because equal pay hasn’t been achieved in many workplaces all around the world. On this day make sure that you spread the awareness and the knowledge about the day to others. Read about the gender pay gap and laws that are in action regarding the issues. It is a day to know your rights and to fight for what you deserve. On this day you can join in any movement or that work for equal pay. Post pictures and share your thoughts on social media about Equal Pay Day by using the hashtag #EqualPayDay.

Thank you for reading the post. You can celebrate every day with Happydays-365.com and Happy Equal Pay Day 2019.